In what are largely “commuter schools”, students have less opportunities to connect on a daily basis. Many students balance coursework, family commitments, and multiple jobs. It’s easy for campus life to fall by the wayside.  In the face of this, Participatory Budgeting (PB) is a vital source for building community at public universities.

When I was a student at CUNY, I worked with PBP to launch PB in four colleges at CUNY:

By empowering students to decide together how to spend part of each school’s budget, we built something that was missing at our commuter schools—community. While the processes vary in size, structure, and outcomes, a common connection and sense of purpose now exists within and across these colleges. 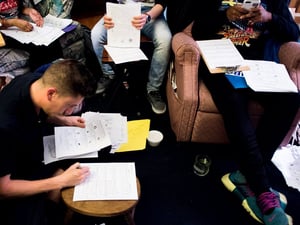 I’m still struck by this response. In 2016 I was running a participatory budgeting (PB) vote table at Queens College, part of the City University of New York (CUNY). Salvatore Asaro had never heard of PB, but as he cast his student vote, he felt like it was the second coming of Athenian direct democracy.

Sal quickly transformed from a PB voter to a volunteer, and next year to a leader on the PB Steering Committee. “By organizing together around a common democratic ideal,” Sal reflected, “we create a CUNY-wide notion of community and togetherness.”

Even better, unlike in Athenian democracy, everyone can participate in PB.

When gathering votes in the university cafeteria, William Novello asked a group of students to vote: “Their response was ‘We can’t, we aren’t citizens’ (This was during the 2016 primaries). I told them that as students in Queens College they could vote for the projects. The one guy was really excited and encouraged all his friends to fill out ballots too.”

And their participation sparks new connections. 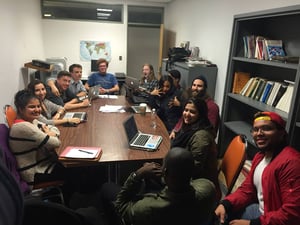 Nathalie Garcia, one of the early Student Organization for Democratic Alternatives (SODA) advocates for PB at Hunter College, found “students work towards a common interest through PB-CUNY, and with that interest students develop a connection. And through that connection they come to see their college as more than just a place of study.” She’s even seen PB-CUNY bring together people that might otherwise never cross paths: “Students from Hunter College are meeting students from Brooklyn College—meeting and exchanging ideas.”

When given the space, students, faculty, and staff voice a desire and need for community. PB at CUNY has demonstrated this. It has also gone beyond this. PB is proving to be a source for building student power and creating community.

A year ago, this work inspired me to join a community of PB Amplifiers, because I believe PBP is on the cutting edge of sharpening and broadening democratic practice. Share this story with university students, professors, and administrators, let us know if you want to start PB at your university, and consider joining our community of PB Amplifiers.